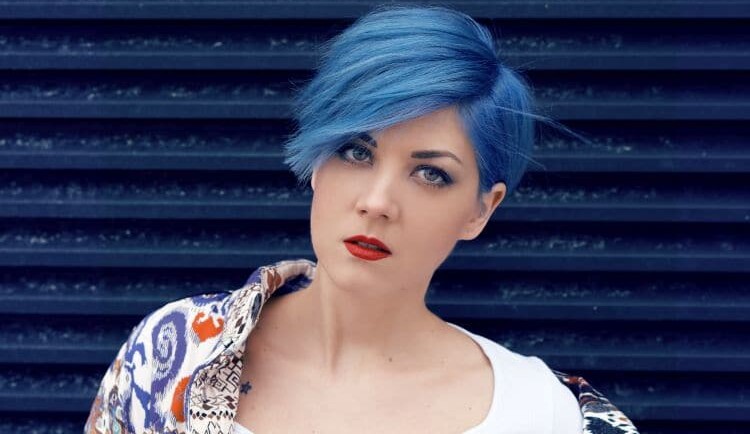 GABRIELA HORN aka PÆNDA represents Austria at the EUROVISION SONG CONTEST 2019 in Tel Aviv with “Limits”, the only ballad on her second album “Evolution II” (Wohnzimmer Records). The album, released on April 26th, 2019, celebrates determination and emotion. The Styrian electropop musician spoke to Julia Philomena about courage in public, self-discovery, and the love of grand gestures.

“THIS IS A PROJECT OF THE HEART.”

The Eurovision Song Contest, an album release and a tour are on the schedule. Is the current attention mostly flattering or exhausting?

PÆNDA: I really enjoy what I do! This is a project of the heart, so of course it’s nice when someone is really interested in me and my music.

The Eurovision Song Contest takes place for the 64th time this year. Is it a festival for Europe, for entertainment or really for music?

PÆNDA: I think it’s a festival for everything!

The song “Limits” was released on International Women’s Day. An event about which you have already spoken. In several interviews you said that the message was important to you, to love yourself, to know your own limits and to respect them. The number wasn’t written specifically for the Song Contest, but are you generally interested in making a statement and a taking a position in public space?

PÆNDA: Yes, as far as this topic is concerned. I wrote the song because I had to process a lot. To talk about all this, also in public, to make it a subject of discussion, is for me just as much a kind of processing as the song itself. I hope it gives some people the courage to talk openly about their feelings.

“Limits” is the first Austrian contribution written and produced exclusively by a woman. You said that it was long overdue for more women to get involved with technology. Is it important to you to be a role-model? Or perhaps even a motivation?

PÆNDA: The motivation for me was definitely a few experiences in which I felt for myself how unequal the relationship of respect between men and women still is in some areas. That doesn’t mean that women have to be interested in technology, but those who want it should be treated with the same respect and have the same confidence as men. The same applies, of course, to men in areas dominated by women.

Your first album wasn’t as poppy as “Evolution II”, but it wasn’t dissimilar thematically, because it was also about very personal issues. Is your song “Good Girl” a humorous critique of patriarchy or a clear declaration of war?

PÆNDA: I think it’s a bit of both. It’s mainly influenced by my many years of experience in gastronomy.

How has your attitude toward a strong message in music developed? For example, how did you decide to make more straightforward pop for the new album?

PÆNDA: I love dancing and I wanted to write an album that would make it possible to dance. But it was clear to me that it had to be a little more straightforward. I simply lost the fear of simplicity, of being labelled as a generic musician. I like pop music, I like beautiful melodies: I must enjoy singing a song and there must be grand gestures.

You sing in English. A statement or a preference?

PÆNDA: No, it’s just easier for me to write in English!

You make electronic pop, but as a child you sang in a choir. How were you musically socialized?

PÆNDA: There was a lot of singing and dancing at home.

You arrange and produce everything yourself. Do you ask your family, friends etc. for advice? What influences are supporting you concerning your work in your home studio?

PÆNDA: I have a lot of great colleagues who I can always ask for help. I’m very honest with myself, I just can’t know everything.

Your music is danceable and you demonstrate this yourself in some videos, “Limits” is the only ballad on the new album. In the music video you stand motionless in front of the camera. What role does physicality play for you?

PÆNDA: Physicality plays a big role! I also have way too much energy, which is probably why I love dancing so much. Sitting quietly is unusual for me, but I’m learning it right now.

In Vienna you won’t be performing in a classical concert context, but in a club, the Grelle Forelle. What kind of audience participation would you like to see?

PÆNDA: Everyone can decide for themselves how they would like to participate!

You have chosen blue hair as your trademark, and the colour is generally very present. Not only your hair is dyed, but also the hair of the women in the music video for “Good Girls”. Generally the look of the videos is blue, as are some of the props. Is it a gimmick or does it have a deeper meaning?

PÆNDA: It’s more like a funny idea from the director. I just found the wigs funny, because my blue hair becoming a thing was completely unplanned. Why, I can’t say for sure. But I like to laugh about myself, too.

What is the name PÆNDA all about?

PÆNDA: I actually look like a panda in the morning, the spelling PÆNDA is just a variation.

Before you started your solo project PÆNDA you were part of the German casting show “Popstars” in 2015. Does this experience help you in terms of nervousness ot the ability to accept criticsm, etc.?

PÆNDA: In any case, I learned to function when I should, and not only when I want. I have learned to deal with cameras. This helps me to approach all the big things more calmly.

If there is an hour of free time between one hundred appointments, what do you do?

PÆNDA: I sleep or do sports.

Julia Philomena – translated from the German by Dave Dempsey.